Unlike with people, there is no emergency system in place for injured wild animals; no expectation that help will be on the way as soon as someone notices your accident and dire need for medical care. Unfortunately, unavoidable collisions with animals happen all the time and many animals don’t die upon impact even when the trauma is incredibly severe and injuries are fatal. There is nothing they can do when it happens.

I’m also very aware that at any given time, drivers may have only a split second to make a judgement and react – avoid an animal if possible or risk injury and potential devastation to other drivers. I totally get that, which is why I was completely shocked that the driver of a truck that could have avoided an injured opossum in the road, or even just slowed down, chose not to do so and drove right over him.

Not five minutes after leaving a restaurant to head home, I saw an opossum sitting upright in the opposite lane of a two-lane rural road. Instantly my heart skipped a beat and my stomach dropped as I saw him try to slowly raise his head. I knew he had been hit. He tried standing up but couldn’t. The movement was so slow and labored. I could see him trying to lift a leg that was extensively injured, but he couldn’t move forward.

As soon as I could, I pulled over and back around with my hazards on. As I put the car in park, a large white truck had come up the same lane. As the opossum’s head slowly turned, the truck went barreling over him. The sight was such a shock I couldn’t even scream. The truck was tall enough to pass over his head, and he remained upright despite getting rocked from the rush of air that came from the vehicle going about 50 mph.

The only thing I had in my car was my old sweatshirt I wore to the wildlife center, so I grabbed it.

Two other passers-by saw what I was about to do so they kindly slowed down and drove by in the other lane that was completely clear. The opossum was still hunched over in an upright position but not moving. I gently placed the sweatshirt over him, carried him over to my car, and placed him in my trunk. Not a flinch, not a hiss.

It was after-hours at the wildlife center where I volunteer but fortunately I was able to get ahold of someone who lived close enough and was willing to come over and help. She gently lifted him out of my car, brought him inside, and started to pull the sweatshirt back for an exam. It didn’t take long for her to say she was going to take him outside. I knew what that meant. That meant that he wouldn’t have to suffer much longer. It meant that soon he’d fall asleep; the confusion and agony of what had happened would be over.

I suppose there could have been other reasons the truck drove right over him, but since I saw the whole thing, I can only assume he didn’t give a shit. If that was the case, he’s certainly not the only one.

I never gave thought to opossums one way or the other until I met Snitch, a disabled opossum education animal at Fox Valley Wildlife Center. She was hit by a car and survived, but suffered neurological trauma, lost her vision, and also some teeth. She is why I learned just how cool, and misunderstood, these mammals are. 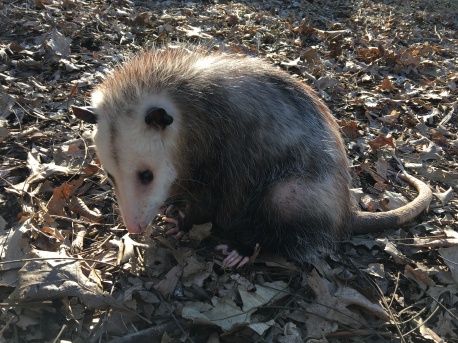 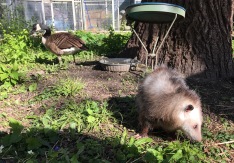 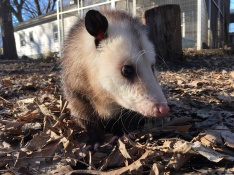 This is Ciega, who joined the education wild animal team after Snitch passed. Ciega also had neurological trauma and blindness from being hit by a car. Not at all vicious or fearsome, she let me take her outside for recess on nice days.

Now that I know better, I’d gladly welcome them into our yard should they choose to visit and provide free cleanup services. I’d never pick up a wild one to pet and cuddle, understandably they get defensive and scared like any other animal that feels threatened, but there is no reason at all to hate.

The initial accident with the opossum may have been unavoidable, but callously driving over him was. Moments like that remind me that I live in an incredibly selfish and neglectful world. However, the kindness and compassion of a young lady who unselfishly answered the call to help end his suffering, reminds me that not everyone is so heartless.

Sometimes there are things can you do to help in these situations and sometimes there aren’t. I get that. But life in the wild is tough enough and there is no need to make it tougher. Have a heart, have some compassion, and please give a shit.

Good to keep handy, Animal Help Now is a resource for wildlife care contacts across the U.S. https://ahnow.org/#/

“Don’t be a hater. Please brake for awesome possums.” – The Awesome Opossum, Center for Biological Diversity