A growing desire to get some food I can’t get at the local grocery store trumped my antipathy of getting into traffic and shopping with the masses on the afternoon of Sunday, June 7th. Reluctantly, I set out for my 16-mile journey.

About twenty minutes into my half hour trip, I noticed a soggy little animal trotting along the side of the street close to a busy intersection. It seemed like the size and shape of a kitten. I wasn’t sure exactly what to do in the moment but figured I should at least try to catch it. Once I was able to pull over and get a better look, I noticed a distinctive white and black mask.

That was no kitty cat. It was a little raccoon.

This is the intersection where we first met.

I was not prepared to fiddle with a raccoon that afternoon. However, in those seconds of deciding what to do, I knew immediately where I could take her. If I were a helpless raccoon kit about to play in traffic, I’d hope that someone in a position to help would do just that. The grocery expedition would have to wait.

Fortunately the wee bandit hung a right as well, sending her my direction. Thinking fast about what to do and how to do it, I grabbed a beach towel from the back seat. I stretched out the towel as I approached her. Her curiosity quickly erupted into fits of screams and clawing the moment I threw the towel over her. Can’t blame her, I’d have done the same thing.

By the way, did anyone else at this busy intersection pull over or roll down a car window to ask if everything was alright or if I needed a hand? NO.

Pinned down against the sidewalk under the towel, I worked fast to bundle her up like a burrito so that she couldn’t nip or scratch me.

My work with the wildlife center has taught me to keep a few old towels in the car for just such an occasion but unfortunately I had no way to contain her. Looking at my options, I had several large tote bags for my shopping trip, so I started bagging. She was carefully triple-bagged for good measure because raccoons carry disease that can be transferred to people and pets. Besides, my vivid imagination already had her escaping from a bag and attacking me, sending us both careening off the road. I placed her on the passenger seat next to me. It was the best way to ensure I could keep an eye on the road and any funny business coming from the bags.

When I finally arrived at the center, I anxiously handed over my sack o’ raccoon to staff member Audrey. With bated breath I asked if the kit was OK. There had been no movement or sound at all from the bag during the entire trip. About four seconds after making her way through the towel, Audrey flinched and said, “She’s alive.”

She was immediately put in a quarantined area for new raccoon arrivals and given a vaccine against the Distemper virus. I’d have to wait a week or two to even learn if she was carrying a disease that would change her fate yet again.

This is now her beach towel.

Fortunately that time came and went without any health issues. I’m told by staff that she mellowed over time once she got used to the routine of being fed and not smothered in towels. Since she was so little, she received daily formula feedings until she was old enough to be weaned onto solid foods.

Getting ready for a feeding. Doesn’t she look less “attacky”?

Once she was eating solids on her own she was moved outside to an enclosure that allowed her to readjust to the changing temperatures, climb, huddle up, and get her own food (which was provided in the enclosure but she had to make an effort to go get it). 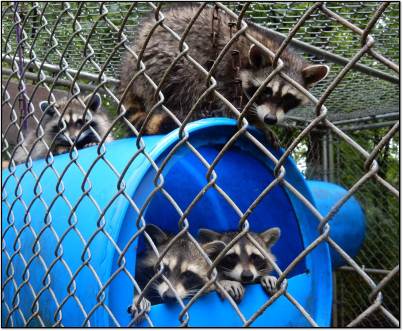 I’m thrilled that she was released on October 17th  with several raccoon friends to a heavily wooded area. Here are some photos of the release: 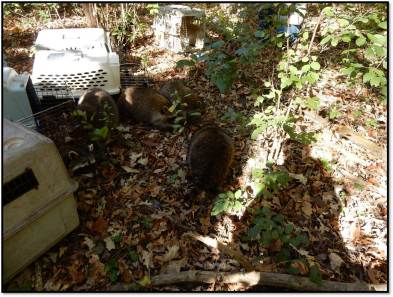 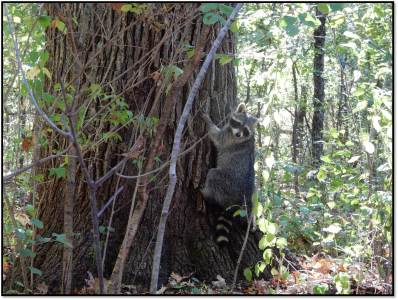 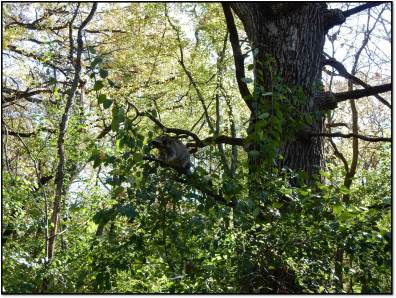 Kits are left orphaned usually because mom was hit by a car or she was trapped and removed from someone’s property. When the latter happens, kits may be left behind somewhere in the house or around the property unbeknownst to the home or land owner.

It’s not uncommon for raccoons to make themselves at home where humans are likely to leave lots of goodies in the trash. They’ll eat just about anything, so any food trash and pet food left outside makes their job to find food a lot easier. They also look for warm, quiet spots to raise their young, like attics. They too have a “work smarter not harder” ethic. Desirable? No. Admirable? Yes. There are several good resources available from The Humane Society’s “What to Do About Raccoons.”

There are occasions when someone without the proper permits or licenses tries to rehab a raccoon at home or even keep a little one as a pet. Bad idea. Why? Here are 10 reasons from “The Wild Animal That Doesn’t Belong in Your Home” by Dr. Becker. Aside from ensuring that the animal gets the right nutrition, is fed properly, and follows an appropriate weaning schedule, once an animal like a raccoon is imprinted and/or has become accustomed to life with humans, it’s extremely difficult to make them wild again or hypnotize them into thinking it all never happened.

I’m definitely not suggesting that anyone go put themselves in harm’s way by handling a wild animal that could bite, scratch or carry disease! However, if you’re an animal lover like me and are likely to help a critter in need*, you may want to have handy:

*In need refers to a bird or animal that is truly orphaned or requires medical care. Not all little ones found alone are necessarily orphaned. For example, mother cottontail rabbit leaves her nest for an entire day so you might never see her. Sometimes little ones like birds and squirrels can be reunited with the parent which is always the animal’s best chance for survival. I knew for certain this raccoon was much too small to be ambling aimlessly around town, especially in the middle of the day. Young animals that would not otherwise leave their nest or den may do so if mother stops coming around to feed them; they’ll go in search of food even if they don’t know what they’re doing.

Consult a local licensed wildlife rehabber if you’re ever in doubt of what to do.

2 thoughts on “The Raccoon Rode Shotgun”