Saturdays filled with feathers and fur are once again winding down for the year. I already miss the demanding shrieks of hungry baby birds and it has just barely begun to snow here around Chicago.

No two visits to the wildlife rehabilitation center are ever the same. The guests, as I like to refer to them, come in for numerous reasons and I never know how long they’re going to stay. If asked, I’m sure they’d all like an early checkout and I wouldn’t blame them a bit. If something in a big predator suit put me in a confined space and handled me a bit here and there, I too would execute every life saving measure to get away, even from predators who bore a striking resemblance to nice ladies in sensible glasses wearing cute duck t-shirts. I give my kindest expression and will thoughts of pure comfort and well-being while providing care in efforts to calm them but it doesn’t generally work. That’s just the way it goes.

This past year seemed extra special and I’m sure it has had much to do with seeing a greater variety of birds and several new experiences in general with all the animals. I got a warning nip from an owl, was completely startled by a raccoon that patted me on the shoulder, secured a heron’s leg during an exam, provided bird physical therapy, fed a fox, and was winked at by a turtle. Aside from many songbirds I’d cared for previously, new to my own eyes at the center was a scarlet tanager, nightjar, black-capped chickadee, pheasant, peacock, turkey, sora, button quail, sandhill crane, snow goose, peking duck, great blue heron, and grouse. I’d like to give an honorable mention to a snapping turtle that spent a little time lodging in the bird room, too.

Juvenile Male Cardinal (the spot is from mashed berries)

Northern Cardinal: This handsome little fella completely stole my heart. I was there the day he came to the wildlife center as a squawky, sparsely-feathered nestling and there the day he took his first flight of freedom. I watched him eat his first solids, and over time, develop his big boy beak and grow a tail. I am so honored and privileged to have played a role on the team who helped this particular little bird get a second chance. As the first bird that fascinated me as a child, the northern cardinal will always have a special place in my heart. All About Birds: Northern Cardinals

Goslings: The center was filled with the melodious sounds of squeaky young waterfowl. Here are a few goslings that were successfully cared for through to release. As these little goslings tottered and staggered about with their itty bitty baby wing nubbins out for balance, it was amazing to know that they would eventually grow to approximately one and a half times the size of their adult bodies in order to heft them up in flight, and at times, whack nice ladies in sensible glasses who would try to provide them with room service. All About Birds: Canada Goose 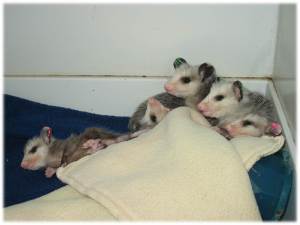 Opossum: This year I learned some pretty cool facts about opossums. As the only marsupials in North America, opossums are immune to rattle snake venom and rabies. When they flash those pearly whites, they’re flashing 50 of them, more than any other North American mammal. Even if you don’t find their hand-like paws endearing, please give opossums a break. They are scavengers that help clean up nature’s waste. The National Opossum Society

Turkey: I am not sure how it came to be that this adult turkey* found his way to the center. I thought that this collection of photos was much more satisfying and representative of the experience of trying to get the perfect shot than the perfect shot itself. He was silly, curious, and sweet. Seeing that he was already people-friendly and was not going to be released in the wild, I was allowed to speak to him and touch him. I was told that he liked to be petted, so I rubbed his chest and buried my hand in his thick, soft feathers. Let’s just say…he didn’t hate it.

Pheasant: Like the turkey, I unfortunately don’t know the history of two identical-looking pheasants that were shuttled to the center. The other bird, not pictured, had an injured foot that successfully healed. I snapped a photo of this curious bird having a little look-see while stretching her legs. Someone on the Cornell Lab of Ornithology Face Book page suggested that this is a swinhoe’s pheasant.GBWF.org: Swinhoe’s Pheasant 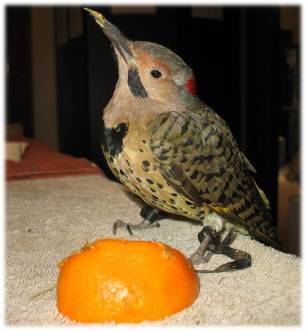 Wooka: You could say that Wooka, a male northern flicker, relocated for work. Originally cared for by the wildlife center’s specialist at a center in North Carolina, he joined the animal ambassador team at the end of summer. He is underdeveloped with only one eye and misshapen toes that do not allow him to climb well. However, doing what woodpeckers do best, Wooka likes to peck and lick his pb n’ o (peanut butter and orange) treats. He was a hit with the children who learned more about woodpeckers, other wild birds, and many other kinds of local wildlife at the center’s open house. All About Birds: Northern Flicker 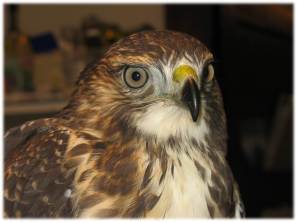 Zihna: Zihna is a Red-tailed hawk that joined the animal ambassador team in 2012. He was brought in having suffered a head injury. It was later determined that he unfortunately could not be released. Zihna sits very nicely on a perch while demonstrating his laser-like focus on moving objects. Thanks to training by staff, he is now able to accompany the other animals on educational program outings. All About Birds: Red-tailed Hawk

Noah: Noah is without vision. The wildlife center director explained that not having eyes could have been due to a rare birth defect or due to an infection prior to birth. As he is unable to see, he did not vacate the nest with the rest of his siblings when they were mature enough to leave. His reluctance to leave was observed by a home owner who originally took notice of mother rabbit’s nest in her yard. Sweet and full of energy, he is the most recent mammal addition to the ambassador team. He loves his hay and assorted bunny nibbles. National Geographic: Cottontail Rabbit

The new ambassadors join the ranks of Lucy the Canada goose, Toby the 3 toed box turtle, and Ernie the pigeon.

To a casual observer, I am changing soiled towels in a bird cage or giving a dish of fruit to some squirrels. For me though, it’s the thrill of connecting with and providing care for these amazing creatures that do not have a voice to ask for help. I gasped when I saw the most brilliant red-orange I had ever seen on the tanager. It is completely arresting to lock eyes with a wary, soulful fox. The antics of squirrels just being squirrels make for some of the best free entertainment out there. They give back to us tenfold with the opportunity to once again enjoy their charm and beauty back out in the wild.

Many more new guests will arrive in spring, and I hope that I am there once again to accommodate their needs during their stay.

*I am not sure of the species. Please free to add it to the comments section if you know or have a good guess!