“It has been aimlessly hopping against the brick building and against windows for a few hours, gaping at anything that comes near it.”
“Hours?”
“Yes.”
“Has any parent been trying to feed it?”
“No.”
“You haven’t seen any bigger robin hovering around it?”
“No.”
“Does it seem like he’s trying to feed himself?”
“No.”
“Do you see a nest?”
“Yes.”
“Can you place him in or by the nest?”

This is when I got a very detailed description of the setting, represented by the graphic below. The screen shot is the lot where Joel was working. The arrows represent everywhere the bird was hopping, including making his way towards a busy four lane road. The dashed yellow line represents 10 foot-tall fencing around spindly trees at least 30 feet high where Joel saw two nests. He said that placing the bird at the bottom of the trees would mean thrusting it through the fence and leaving it on trash-littered gravel.

I asked Joel to place him in a box by the trees (represented by the red box) where he could keep watch for the parents just in case they found all those scary big blue stick figures too intimidating. Another hour came and went with no parental care.

Around 7:00 that evening, Joel walked quietly through the kitchen from the garage and gently handed over the box. I pulled back two of the four flaps and saw an older nestling/young fledgling-aged American robin on a branch snoozing away with his head tucked under his wing. I fixed up a nice little nest for our new house guest by lining a small plastic bowl with tissues and placing him in a towel-covered enclosure so that he could rest safely, comfortably, and quietly for the evening.

Our little guest’s next trip was to the wildlife center. In three years, this was my first time bringing in a patient. He became bird intake #106. Not only did I get to care for him during my shift, it hadn’t been more than a few hours before he was joined by another orphaned robin that also needed a little extra time before braving the world on his own.

Over time, he was joined by several more robins and I got to continue caring for them all on my shifts. I was happy for him because it meant that he and the other birds were learning how to be robins.

I was able to be there and take photos on the day of release. “Our” robin was released with six others on a beautiful, sunny day to an area thick with trees and vegetation. 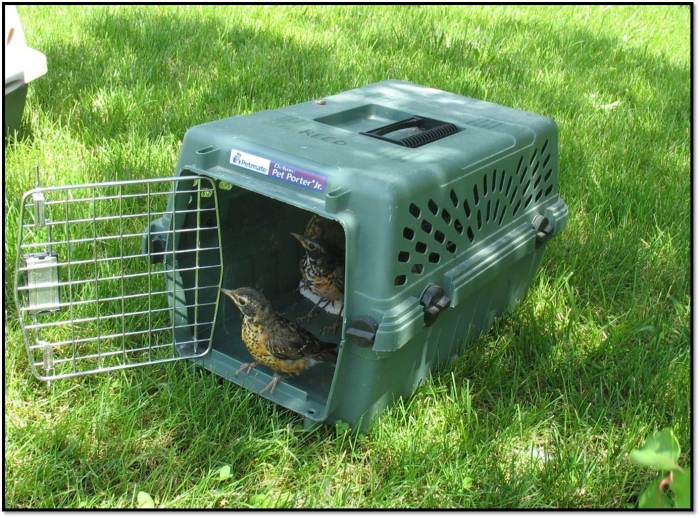 They were hesitant at first to make a move when the door was opened. Within about a minute, one robin jumped up and took flight while the others cautiously peered out. Slowly but surely, one by one, the others came out of the cage and took flight up and in to the nearby trees.

The American robin is a common bird across the North American continent. According to the Cornell Lab of Ornithology, “…only 40 percent of nests successfully produce young. Only 25 percent of those fledged young survive to November. From that point on, about half of the robins alive in any year will make it to the next. Despite the fact that a lucky robin can live to be 14 years old, the entire population turns over on average every six years.”

Were the car trips, daily feedings, and daily cage cleanings for this one little common bird that odds say won’t live that long even worth the effort?

Robins show us how to enjoy a bath like it is Christmas morning. They assure us that winter is  over and spring has once again arrived. They tell us that it’s time to wake up with their dawn song. Some of their hearty and spirited calls sound like laughter, as if they just heard a really good joke. They pump their tails in time to their chirping, and that’s just kind of cool.

Aside from my own selfish ideas about their value (read: entertainment), I can only assume that if the birds got a vote, they too would raise a wing to say, “Yes, it’s worth the effort.”