As I do most mornings, I had gone outside to the deck to hang up the bird feeder and remove our low-tech-but-effective coffee can contraptions used to thwart raccoon thievery from the suet cages. After opening the doors to what I’ve dubbed “The Seed n’ Feed” to our patrons, I turned to go back inside. As I did, I saw a little lump under the three-seater outdoor swing pushed up against the side of the house. It was a female house finch, one of our best customers. Immediately I knew that what I was looking at was not good, as birds generally do not stretch out for a rest like that, especially with the shopkeeper clomping around the store. It sure didn’t seem like she had hit the house siding or kitchen window, because she would have fallen straight down, not squarely under the glider. Even if she had hit the house and tried to crawl away with injury, she wouldn’t have been facing the house, which she was. Judging by the way she was positioned, I could only conclude that she was ill or she knew it was simply her time to go, and sought a safe place to peacefully leave.

Gingerly, I picked her up and studied her eyes, her chest, and her toes, to see if there were any signs of life but there was not. She still felt a bit warm, she must have recently passed. I decided that it would only be proper to bury her there at the deck, where she undoubtedly spent so much time.

I shoveled out a sheltered little spot under the deck by a large rock and a single toad lily plant. As I gently placed her inside, I thanked her for visiting us so many times, allowing us to enjoy the nature of her whimsy and curiosity and muse about what she was saying when she chirped and squeaked. I promised her that I would continue to make sure her babies were kept well fed and safe here. I patted the earth back down around her and said a final goodbye. 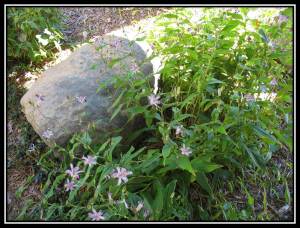 About a month later, I couldn’t help but notice how vibrant and robust the toad lily plant appeared. Despite no special care on our part, it seemed significantly taller and bushier, the stalks markedly greener and thicker.

I’d like to think this notable show of vitality is a gift from our finch, nourishing the plant and making it a lovely sight to see, her way giving back to us for helping nourish her.